History of the Department

It is believed that the Hopewell Township Police Department started part-time in the 1920s or early 1930s. The first Chief of Police was Clifford Snook. Chief Snook's brother, Russel A. Snook, later became the fourth Colonel and superintendent of the New Jersey State Police.

Carlton "Cubby" Force followed Chief Snook and served from 1936 to1949. Chief Malcolm Joiner took over from Chief Force and led the department until 1969 when Mathew J. Maloney became the first full-time Chief of Police. He served from 1969 to 1982.

In January of 1975 the department began delivering full-time, round the clock service to the residents of Hopewell Township. Until that time the New Jersey State Police Hopewell Barracks answered many of the calls for service from township residents.

Chief Robert J. Ferrarin, who had served as a part-time patrol officer before becoming a full-time officer in 1974, became the second full-time Chief in 1982 and served until 1995. 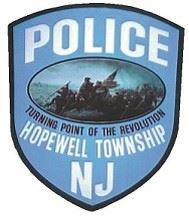 In the early 1980s the township police department began to provide police services to the Borough of Hopewell when the small borough department was disbanded upon the retirement of its chief, Robert Dodson. The township department continues to provide service to the borough through an inter-local agreement.

Chief Michael A. Chipowsky also served the department in a part-time capacity, as a special officer. He became a full-time patrol officer in 1974 and rose through the ranks to become the Chief of Police in 1995. During his tenure he brought the Drug Abuse Resistance Education (DARE) program to the department. He also implemented a completely digital dispatch and records management system for the department. Chief Chipowsky retired in 2006.

Chief George C. Meyer was sworn into office in March of 2006 and became the fourth full time Chief of the department. One of Chief Meyer's many duties included serving as the Hopewell Valley Emergency Management Executive Director. In this capacity, Chief Meyer was instrumental in coordinating emergency operations during the severe windstorm in March of 2010, Tropical Storm Irene in August of 2011 and Hurricane Sandy in October of 2012. Chief Meyer served for 38 years, having begun his career in 1975 and retiring at the end of 2013.

Chief Lance D. Maloney was sworn into Office January 1, 2014. He began his career with the Hopewell Township Police Department in January of 1994.Chief Maloney retired in August of 2020.

Lieutenant William H. Springer, Jr. took over the department on August 1, 2020. He served as the Acting Chief until November 12, 2020, when Police Director Robert "Bob" Karmazin joined the force.

Lieutenant Officer in Charge Springer is well known thorough Mercer County and beyond. He has worn many hats over the years, including Fire Chief of Hopewell Borough Fire Department. He has held the position of Executive Director of OEM for Hopewell Valley Office of Emergency Management, and is a Certified Emergency Manager in the State of New Jersey, holds a Associate of Science degree in Aviation Business Administration from Embry Riddle Aeronautical University, a Bachelor of Science in Management from Embry Riddle Aeronautical University and a Masters of Arts in Leadership and Public Administration from Centenary College. OIC Springer is a graduate of the FBI National Academy 274th session, the Mid-Atlantic Law Enforcement Executive Development Seminar and the New Jersey State Association of Chiefs of Police Command and Leadership Academy. He currently sits on the board of managers for Mercer County Public Safety Radio Committee, a founding member of the Mercer County Rapid Response Partnership, and serves as treasurer for the Hopewell Valley Veterans Association.